From grain to nation-building

The origins of TD

TD's earliest predecessor, The Bank of Toronto, was founded in 1855 by a group of millers and merchants. Rooted in Canada's emerging grain industry, the new bank provided essential financial services. As the bank's business grew, a provincial branch network was built and expanded outside Ontario, to Montreal in 1860.

Inspired by the prosperity and optimism following Canada's founding in 1867, a group of professionals, industrialists and financiers raised funds to create a new financial institution. Eager to help the young country finance important nation-building projects, the Canadian Parliament issued a charter to The Dominion Bank in 1869. Opening its first branch in 1871, The Dominion Bank kept pace with The Bank of Toronto in extending its services to customers and communities across central Canada.

As the Canadian west opened to development in the 1880s, the banks began extending loans to the resource, utilities and manufacturing sectors. The Dominion Bank made the first move west, opening in Winnipeg, Manitoba in 1897, and two years later The Bank of Toronto opened a branch in the British Columbia mining town of Rossland. 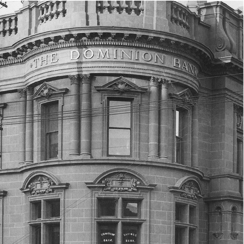 The new century heralded impressive growth for both banks, with The Bank of Toronto expanding from 16 branches in 1900 to 161 branches by 1920. The Dominion Bank made its first international venture in 1911, with the opening of an office in London England, followed by a New York office in 1919.

Overcoming the challenges of the Great Depression and the war years, both banks extended their branch networks rapidly, mirroring Canada's industrial and building boom through the 1940s and 1950s. Recognizing that a union of equals would help them grow with the post-war economy, The Bank of Toronto and The Dominion Bank negotiated an amalgamation in 1954.

On February 1, 1955, the Toronto Dominion Bank was born with 499 branches and a combined team of 5,500 employees. The new bank philosophy emphasized customer service and product knowledge. "The Best in Banking Service", TD's first slogan, evolved into "The Bank Where People Make the Difference." 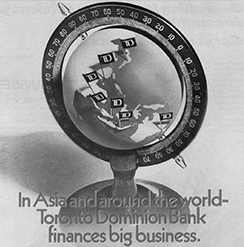 Within a decade, TD ventured into new business lines, including large international project financing. To satisfy its diverse customer base, TD launched many new products and services, including mutual funds through the branch network in 1964 and the VISA card (known as Chargex) in 1968. TD's global vision came to be symbolized by its Head Office, the dramatic, international-style Toronto-Dominion Tower which opened in 1967 and for a time, was the tallest building in Canada. Capping this era of modernization, TD's introduced a new corporate identity in 1969 with the iconic TD Shield.

In the 1980s, TD continued to enter new businesses such as international money market trading and commercial real estate developments, including the Toronto Eaton Centre and the Pacific Centre in Vancouver. The bank made a landmark move into the discount brokerage business by launching Green Line Investor Services and later added a full-service brokerage. In 1987, Toronto Dominion Securities Inc. was established to provide corporate, treasury and investment banking services to corporate clients. 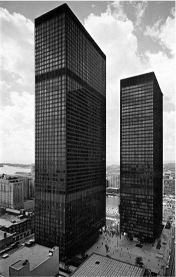 The Bank made milestone acquisitions in the 1990s. In October of 1992 an agreement was struck to purchase the positive assets of Central Guaranty Trust (the company itself was not purchased). The acquisition was completed on December 31, 1992. In 1996 the New York-based Waterhouse Investor Services was purchased, a move that doubled the size of TD's discount brokerage overnight. In 2000, TD purchased Canada Trust. Canada Trust was recognized for its unparalleled customer service – including its precedent-setting extended hours of “8 to 8 six days straight” in its branches, which was launched in 1976. True to its commitment to build for the long-term, TD celebrated its 150th anniversary in 2005 by setting its sights on expanding its North American platform. It acquired 51% of TD Banknorth, which Forbes Magazine had dubbed the "best managed bank in America". A year later, in 2006, TD merged its U.S. based TD Waterhouse discount brokerage operations with TD Ameritrade, creating a top three discount broker in North America. In 2007, TD acquired the remaining shares of TD Banknorth and announced its intention to acquire Commerce Bancorp. Commerce had begun as a single branch in Marlton, New Jersey, in 1973 and had expanded into New York, Philadelphia, Washington D.C., and South Florida. Commerce had earned its tagline "America's Most Convenient Bank" in 1994 when it introduced extended branch hours seven days a week, 361 days a year. With approval of Commerce acquisition in 2008, TD became one of the seven largest banks by branch network in North America. The operations of Commerce and TD Banknorth were merged under the new brand name TD Bank, with the commitment to maintain Commerce's positioning as "America's Most Convenient Bank".

Bank notes originally had to be signed by the President and Cashier.

In 1964, to celebrate its 100th Anniversary, Huron & Erie sponsored tree plantings in communities across Canada.

TD first appeared on TV in 1968, when its debut commercials included the slogan "The Bank Where People Make the Difference."

The Bank of Toronto’s first President, James G. Chewett, was a surveyor before becoming involved in finance. He created some of the early maps of Upper Canada.

Are you a member of the media and have a question about TD's corporate History?

Looking for more information on TD's contributions to the community?

TD is a great organization powered by great people who want to make a difference every day. Every day, we deliver legendary customer and client experiences to our approximately 22 million customers.